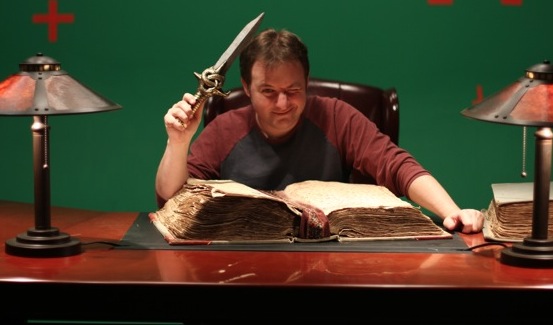 PAX Prime 2011 – As a young game industry journalist, I was going to a large and well-known gaming convention for the first time. And to make it all the more nerve-wracking, it was also only my second time interviewing people in the video game industry. Needless to say, I was nervous going into the interview with David Jaffe, the co-founder of Eat Sleep Play Studios as well as Twisted Metal and God of War creator.

I arrived at the Sony Booth and watched as David signed autographs and interacted with fans of his work. I had followed his blog and his Twitter long before and thought that he was an open and honest man, yet I was surprised to see that he was also friendly and welcoming, especially to the people who lined up for a chance to talk to him.

As the autograph-signing session ended and David was about to leave for a break, I approached him to see if I could interview him later that day. And to my surprise, he offered to do the interview as he ate lunch and took a break from all the chaos of his busy schedule. On the way to the cafe, we stopped at a few booths and talked about the games being exhibited and about gaming in general.

After getting his meal, David surprised me yet again as he chose to sit in front of a wall where other gamers were resting as well. Here was my gaming hero, sitting side by side with gamers. And I realized, this man makes great games because he understands what gamers want and where gamers are coming from.

It was a surreal moment, and one that I will never, ever forget.

Hit the jump for our written and video David Jaffe interview.

SonyRumors: What games, systems, and experiences made you interested in gaming?

David Jaffe: Well, I think people are drawn to games; not just analog games, but video games. And I look at this with my kids and I watch how to them it’s almost like, and I don’t want to be hyperbolistic about this, when you ask them what got you into watching television? To them, to kids today, the interactivity and the ability to control what’s on your screen is just the norm today.

So for me, I have memories that were very powerful of the first game console my dad brought home; it was actually something called the TelStar (Arcade) which was this triangle device that sits on your coffee table. On one side of the triangle was a steering wheel, and then the other side were a gun and a holster, and on the other side were these two pong paddles. And then you’d buy triangle cartridges that stick into it and you get to do Knight Rider rip-offs or you get to do “kill-the-cowboy” games with the gun, and pong-like games. And that was the first one.

But I really did love games from then on. My dad brought the Atari home; I remember getting up at five in the morning before school with my brother to play Space Invaders. I remember the first arcade game I ever played was this thing called Blue Hill, which was this game that had two cowboys facing each other. It was a very simple game, but I always just loved them and they’ve always been in my life.

As I was growing up, I would do three things: I made my own comic books, I made my own movies, and I designed my own (well, they weren’t very good) basic games on my Apple 2 using basic programming language. And so I loved arcade games, I loved going to the arcades, I loved all the consoles, and that was just the beginning. I’ve been a game player since.

I have to say, I’m not one of these super hardcore guys. I have to say I love movies more than games; but as a medium. I love games; I love the potential of games more than movies and on to three times a year, a game will come out that will blow the hell out of every movie that year. So games for me have the ability and every year I get a few where they trump every other medium. But for the most part though, (and I think because games are so hard to make predictably) I’ll play everything, I won’t finish most things. If I have an evening to kill, it’ll probably be something in my apple TV like a movie or a TV show versus a game.

A lot of that, I’ve come to realize recently, is that the barrier of entry now as I get older, as I have kids, as I have a crazy and more-than-full-time job with making games, (I know people who are listening are saying, “Dude, you’re a fucking idiot”) the barrier of entry of opening the game, opening the disc loader, putting it in, if I have to do an update, if I have to install it, anywhere from five minutes to sometimes forty minutes before I’m actually playing the game, I’m done. I don’t have the fucking patience for it.

I have so many other things competing for my interest that if it’s a game like that, unless it’s a game I know I’m gonna love, or the reviewers have said “Dude, you’ve got to play this,” I won’t give it as much time as I would have in the past because, hell, I said in my keynote yesterday that I love interactivity, and I can get a lot a lot of that from my iPad, or my PSP, or my DS, or my iPhone and get my little fix of gameplay and be just as happy because a lot of the games today are so much about presentation and graphics and stuff that unless I’m gonna sit down to really get immersed in a world, I can get the same thing on my iPad.

I certainly haven’t moved away from games, but what I’ve done is I’ve become a lot more spread out as there’s so many more options of gameplay; from the 99cent or free-to-play instantly that you’re playing on your browser or on your iPhone, all the way up to these huge epics like we were looking at earlier (RAGE, Skyrim).

I have so many more choices now that I’m no longer as tolerant of some of the things in the big console releases like time-sucks or fetch quests that I’m like “Fuck you, I’ll go play something else.”

But there will be those one to three games that are hardcore console games that I will fall in love with and will make me go “I want to make a game like that.” But they are few and far between. 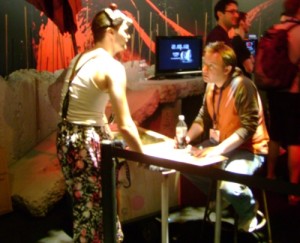 SonyRumors: Have you seen any of those “one to three” hardcore games that have made you say that this year?

David Jaffe: I haven’t played Skyrim yet, but I’m very interested to see if it works for me. I’m interested in making that into one of my big things to play during the Thanksgiving and Christmas holidays, where I can just get lost in it.

Deus Ex: Human Revolution; I loved the first Deus Ex and I’m extremely excited to try the new one. I hear the reviews are great.

Uncharted 3 obviously; I actually was a really big fan of the first one. I have to admit I haven’t finished the second one, and I know everyone says that’s the best one, and I really liked it. I need to go back and finish that but I just got busy with Twisted Metal. But I think Uncharted 3 is one that excites me.

I really liked the Gears of War 2 campaign so I’m looking forward to the new one. So there are more than three. There’s probably about eight or nine but I think I doubt I’ll have them all played during the Christmas season because I’m so slammed.

But there are games like “Shoot Many Robots” that makes me say, “that looks great!” so I know I’ll be playing that. There’s a lot of stuff that I love but I just think if I wasn’t so busy (and I’m not complaining, I’m grateful I’m so busy), I would have the time to really immerse myself in a lot more games more frequently. But as is, you know, you work so hard to make games, you get done at the end of the day and I don’t want to sit there and spend 30 minutes booting up a game. I’ll just hit up my Apple TV and I’m immediately watching a show.

So i’m hoping with this next gen of consoles, there’s more like a sleep mode or something so, just like my PSP and my DS, I’m in. I just want to fucking be in. If I can say something to the hardware manufacturers, please get rid of that awful barrier of entry that all the new consoles have created. I don’t want to boot up, I don’t want to see your screen. I know it’s a Sony PlayStation, I know it’s an Xbox 360. I don’t need to see your logo. I don’t need to go through all the logos. Put the logos someplace else and let me just get into the goddamned game.

You’re probably thinking “dude you must not like games that much if that’s enough to keep you away.”

Sorry, but it fucking is. Because I have so many things competing for my time now that it’s enough to keep me away. So I hope the new consoles address that. That would be awesome.

SonyRumors: Could you tell us how you got started in the industry? Was it difficult to be a developer during that time?

I watched this great documentary about one of the guys who worked at ATARI called Once Upon ATARI, and it was basically interviewing the men and women who made the ATARI2600 cartridges.

To them, even though we look back now and the games are so antiquated and simple, the amount of memory and processing power that they had to work with to make these games was so minimal. And it’s insane how little they had to work with compared to what we take for granted today. So to them, to create a game like Ms. Pac Man on an ATARI 2600 cart was a herculean task. Whereas we have our own different challenges today so I don’t know if it was easier, but I did get lucky that I started in the publishing side. So I worked for Sony right out of college and so even though we had tons of challenges and it was hard making games, both internally and externally, when you work for first-party, when you work for the people who manufacture the console, I don’t have any of those awful stories of “oh the publishers are hard to work with, and we’re the poor scrappy developer.”

*Jan’s note* During this time, I realized that I could conduct the interview through video so I took out my brand new video camera and started filming the final moments of the interview.