Editorial: Steve Jobs Wanted Apple to be like Sony 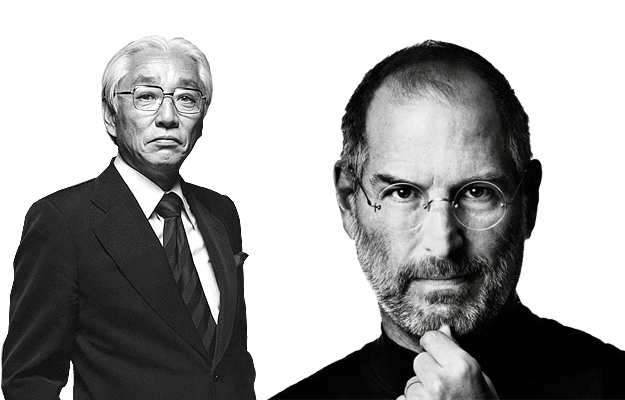 In my mind, the debate isn’t whether Steve Jobs is the greatest innovator of our time, but whether he is the greatest innovator ever. Never has one person been able to touch so many different mediums, offer so many different products, and change the way we see and use technology. iTunes has paved the way for so many other digital services to thrive, though it still remains king by offering music, TV shows, and movies for download; something that most studios and record companies did not want to offer. The iPod helped propel iTunes and changes how we all carry our music and videos around while the iPhone changed how we communicate with others. The iPad, the latest from the team at Cupertino, has forever changed computing and how we view websites, read emails, and interact with the world. Behind all this innovation was the start of computing and the first ever personal computer, the Macintosh. Throughout its long history, the Mac lineup has grown and blown us away with models like the iMac, which incorporated the entire computer and monitor into one box. The MacBook Air would show the world that the optical drive is dead and that notebooks can achieve a level of portability not thought of before.

And that’s because Mr. Jobs didn’t buy into focus groups, groupthink or decision by committee. At its core, Apple existed to execute the visions in his brain. He oversaw every button, every corner, every chime. He lost sleep over the fonts in the menus, the cardboard of the packaging, the color of the power cord. Apple famously does not deal with focus groups or committees because Steve believed that you cannot ask the opinions of the consumer on a product that does not yet exist and that it was his and Apple’s job to create new ways and technology for the world. After all, the consumer would have never come up with the iPhone or MacBook Air. As brilliant a man as Steve was, there were precedents before him and companies that he envied and wanted to Apple to strive for and be like. One of those companies was Sony. John Sculley, who would become Apple CEO when Jobs was famously pushed out of the company in the mid 80s, saw Steve’s passion and admiration for Sony.

“It was very nearly fetishistic, in fact — he even had a collection of Sony letterhead and marketing materials.” He wen’t on to say “Sony was a company that Jobs instinctively admired and saw as model from the very beginning. So it’s been an interesting transformation over time, to see Apple supplant Sony as the center of the consumer technology universe.”

The 80s were a time when many large companies and almost empire-like corporations that are household names now would be starting their growth period by building their cultures, technology, and vision for the future. Yet among them all, Steve was really only focused on Sony.

Sculley  was referencing Sony factories, which were state-of-the-art for their time. Sony factories were not only state-of-the-art, but efficient as well, capable of producing the wonders of the 80s and 90s like the Trinitron and Walkman which changed the television landscape and portable music market. Such efficiencies also allowed Sony to be a profitable company which could provide competitive prices on their products. This led the company to high market shares in any given segment.

He was fascinated by the Sony factories. We went through them. They would have different people in different colored uniforms. Some would have red uniforms, some green, some blue, depending on what their functions were. It was all carefully thought out and the factories were spotless. Those things made a huge impression on him.

The above example can be seen implemented in Apple retail stores. Nearly 30 years later, the above description couldn’t be further from Sony, who has struggled to keep their factories competitive and has continued to reduce their labor force and close factories. Sony has also been unable to to top any given market share, falling behind in TV manufacturing, a field in which they were once king, while the PlayStation franchise is now in 3rd place after toppling both Nintendo and Sega from the mid 90s to 2005. Sony has also been unable to make a large dent in the smartphone market, something which they hope to change though their camera division has made large strides against competitors, a field that was once dominated by Nikon and Canon. 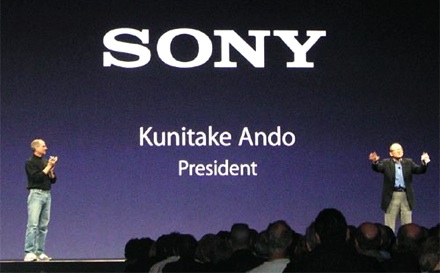 Steve Jobs and Sony's then President

However, what probably impressed Jobs the most at the end was the finish and quality of Sony products. Sony has long stood for a quality brand and a company who doesn’t make products for the sake of products. Apple has long held such a view, being very careful of which markets they enter and only creating products that they feel like will have an impact. This can be seen with the company’s select products which only recently has seen 3 different iPhones offered at a given time (iPhone 3GS, iPhone 4, iPhone 4S) while the Mac line only consists of the iMac, Mac Pro, Mac Mini, MacBook Pro, MacBook Air  and the iPod line which includes the iPod Shuffle, Nano, Classic, and iPod Touch. Again in contrast, Sony, who holds a forgettable smartphone market share, offers over 15 different Android handsets and over seven different computer lines, not including their signature series which includes another five to six models. Now, take into consideration that Sony makes cameras, camcorders, digital frames, televisions, and much more with as many, if not more, offerings (though in certain segments, it makes sense to have a higher number of models). You can see why, instead of consumers being drawn towards Sony, who offers all sorts of products at all sorts of prices, they are turned off as the massive amount of selection and offers can bring forth a lack of uniqueness or competitiveness that another company can offer. Steve would eventually be able to meet with Akio Morita, the co-founder of Sony.

“We used to go visit Akio Morita, and he had really the same kind of high-end standards that Steve did and respect for beautiful products,” Sculley recalls, “I remember Akio Morita gave Steve and me each one of the first Sony Walkmans. None of us had ever seen anything like that before because there had never been a product like that. This is 25 years ago and Steve was fascinated by it. The first thing he did with his was take it apart and he looked at every single part. How the fit and finish was done, how it was built.”

Sony, who broke the mold with the Walkman and Trinitron, changed the way we play games by challenging Sega and Nintendo with the PlayStation and started the evolution of premium designed laptops and desktops where competitors would be busy making boring boxes, is now at a crucial point. Just because they are offering products in the eReader, smartphone or tablet market does not mean that Sony “gets” the new consumer-leading landscape that we live in. The current world is ruled by Microsoft, who has what seems like an unlimited cash supply behind the Xbox 360, Apple, who is able to create groundbreaking products that are unique, advanced, and user-friendly which garner them blockbuster after blockbuster, and Samsung, who continues to enter every market that Sony once was dominant in by offering sleek devices at a more affordable price (notice I didn’t say quality). In such a world, Sony cannot simply survive. A company who once was the champion of cutting edge has for far too long stuck its head in the sand and lived in the past by continually stating that Sony stands for quality while pointing towards old sales figures and assuming current products will reach that level.

Does this mean that Sony doesn’t and isn’t producing quality products? No, but in today’s world where marketing, vision, connected products, and consumer leading technologies are king, Sony continues to enter too many markets for the sake of being in them instead of defining them. Apple, on the other hand, has never been the first to any market with the exception of the personal computer, which they invented. Instead, the iPod, iPhone, iPad and MacBook/iMac line all entered a pre-exisiting market and defined them with a grand vision while its leaders, primarily Steve Jobs, would take the smallest of details into consideration, like the coloring of Google’s logo on the iPhone app screen which had the company’s CEO call Google days before the iPhone launch.

“So Vic, we have an urgent issue—one that I need addressed right away. I’ve already assigned someone from my team to help you, and I hope you can fix this tomorrow,” Jobs told Gundotra. “I’ve been looking at the Google logo on the iPhone and I’m not happy with the icon. The second O in Google doesn’t have the right yellow gradient. It’s just wrong and I’m going to have Greg fix it tomorrow. Is that okay with you?” 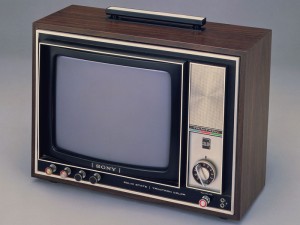 The Trinitron was a Sony product that Steve adored

In the end, it’s easy to see why Steve Jobs wanted Apple to be like Sony and it’s time for Sony to take a cue from Apple. This statement also needs clarifying: Sony being like Apple does not mean they should copy them. As the above examples show, Apple did not copy any Sony products or enter the many fields that Sony is in, no matter how successful they might be in them. This instead means that Sony now needs to use Apple as an example of a company who creates select products with specific visions that have high consumer adoption rate and a high profit margin which can lead to future ground breaking products. Such a shift cannot come from the bottom of Sony and instead must be enforced and practiced from the top down, starting with their CEO.

In part two of this article, I’ll argue why the next or even current Sony CEO must opt out of a normal salary and become a dollar CEO.