Hot on the heels of – and likely unrelated to – the fake hacking of Sony Mobile earlier today, Sony Pictures has been hit by a massive hacking attack. According to reports, when Sony Pictures employees came to their computers this morning, they were greeted with the picture above when they attempted to log in. Since that time, all computers on the Culver City campus appear to be down. As the image above shows, the creepy skeleton image reads “Hacked by #GOP”and demands that “requests be met” along with links to leaked data to show how legitimate their hack is.

Beyond taking control of Sony Pictures computers, the group was also able to take over Sony Pictures Twitter accounts and tweet out proof of the hack. Sony has since regained control of the counts like Starship Troopers, Stomp The Yard, Columbia Classics, Sony Stock Footage, My Daily Clip, Beastly Movie and more which tweeted such things as: 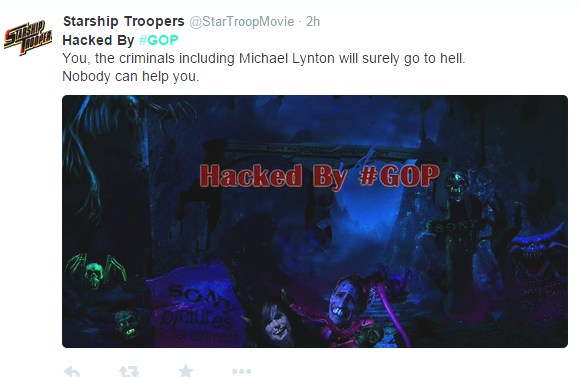 The image appearing on Sony Pictures computers readers as:

We’ve already warned you, and this is just a beginning.
We continue till our request be met.
We’ve obtained all your Internal data, Including your secrets and top secrets.
If you don’t obey us, we’ll release data shown below to the world.
Determine what will you do till November the 24th, 11:00 PM (GMT).

At this time, it’s unclear to us what demands the #GOP group has for Sony Pictures though they claim that unless their demands are met by tonight (Nov. 24th) at 11:00 PM GMT, that they will release a series of internal and private data from the company. Though the severity of the hack is still unknown, it appears that the group was able to get their hands on several zip files which they believe Sony Pictures would prefer the world not to see. We’ve learned that SP has yet to regain control of computers on campus and that employees are forced to leave and work from home as they’re unable to even get on the internet.

Unlike previous hacks, this one seems to be targeted directly at Sony with little information pointing towards compromised information of consumers. We’ll have more on this story as it develops.

Sony’s response to the matter at hand:

We are investigating an IT matter

Interesting note; Crackle, the free streaming service from Sony Pictures has not been affected/targeted by #GOP. Likely nothing to do it but interesting none the less.

Some sites are reporting the URL where the mentioned .Zip files can be found or are keeping the image above intact which contains the URL links. I believe that it’s not the job of the press to further the groups intentions as consequences of such actions are unknown. Frankly I find the idea of guiding others to what could likely be very private information inappropriate for events like this always have some kind of human toll, be it their private information released, identity theft, or loss of job. While I’m eager to keep you tuned it to the events as they unfold, I hope that you voice your concern to sites who are listing the mentioned information.

What type of information do you think the group was able to potentially get their hands on that they believe is so damning?