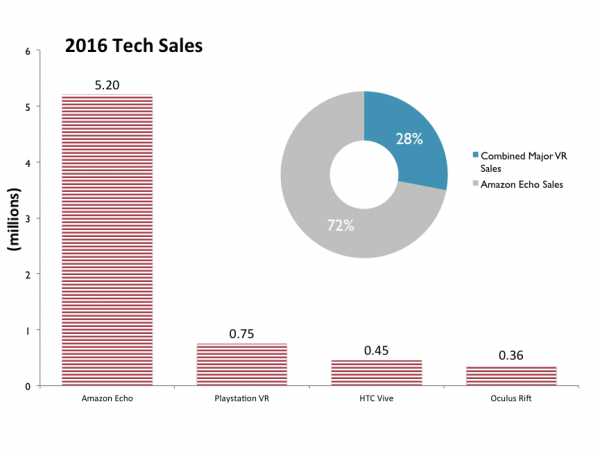 Here is a somewhat interesting report published by Midia Research where they compare the adoption of voice versus virtual reality. The premise goes as such:

Reflecting on narrative matters, because whilst VR and Voice are both pivot technologies representing different new paradigms to what consumers have experienced before, their public personas have been worlds apart. VR’s public image has been one of bombast and exclamation, yet the Echo arrived quietly, building its public profile by word of mouth and through Amazon’s established sales channels. 2016 was the year that these technologies finally saw their wider release (VR headsets were previously limited to developer kits and Echo exclusively in the US until September 2016), therefore it is interesting to map them against each other to see what the numbers have to say on what the overall public reaction has been thus far.

At 5.2m sales, 3.64m more Amazon Echos were shipped than the total number of mainstream VR headsets combined worldwide, despite the fact that it was only released outside of the US (to the UK and Germany) in the final 3 months of 2016. Additionally, although Playstation VR was released in October, it saw 750,000 sales into a total of PS4 ownership market (the requisite for PSVR use) of 50m, revealing an adoption rate of only 1.5%.

If we’re comparing two emerging technologies for the sake of comparing, then they are right: the Echo is kicking the ass of all VR platforms combined. If it wasn’t for PlayStation VR, all other VR would hardly amount for a blip and I’m sure we’ll see that further escalate in 2017. Beyond that, I’m not sure how useful this study actually is because there is little reason to assume the two platforms (voice and VR) are competing for the same space. In reality, what the two offer are extremely different experiences with very different outcomes.

I’d go as far as to say that perhaps the holy trinity of VR includes voice and at the same time, there are simply experiences that voice cannot provide like entertainment which is mainly what VR is looking to tackle currently. Furthermore, the industry as a whole seems in awe of Amazon Echo right now, touting 5.2 million devices sold with a magnitude of devices being announced at CES 2017 that will incorporate Alexa.

But don’t believe the hype because when was the last time any device or trend come out of CES that was the next big breakthrough? Remember how Google TV or Google Home was going to change everything? How about wearables? Or better yet, where is 3D tech? As always, my point isn’t to devalue what Amazon has done with Echo but to put it in context. For further context, despite Echo being a darling of tech journalists right now, you know what’s available on over 500 million devices, supports a magnitude of more languages, is available world-wide, and can be used at the home, in the gym, and in your car? Siri.

In fact in sophistication, availability, and functionality, Siri dwarfs what Amazon is doing and it’s not being talked about because the hot new cool thing to talk about is Alexa and context matters little. Not here, folks. As for PlayStation VR and virtual reality as a whole, we’re still in the early days of what the technology can offer. Could it be the next 3D? Maybe.

But VR, or perhaps AR, has the ability to transform the medium and how we see and interact with the world. After all, 10 years ago when the first iPhone launched, you couldn’t send MMS or record video and see where we are with it today. There is no reason why VR/AR can’t progress the same way.

Finally, here’s a fun fact: millions and millions of people are using AR daily and don’t even realize it – it’s called Pokemon Go and Snapchat filters (and frankly every other social platform offers it as well). The best technology is often the thing we don’t realize and VR headsets might be bulky and limiting today, but that doesn’t mean they will be tomorrow.